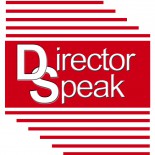 Heidi Grumelot is a freelance director and producer. Formerly the Artistic Director of Horse Trade Theater Group, her Horse Trade credits include: co-creator and producer of the monthly storytelling show TOLD and the founding director of The Drafts, an acting ensemble responsible for new play development and a monthly reading series. Heidi’s New York directing credits include Pia Wilson’s The Flower Thief with The Fire This Time Festival, Donnie and the Monsters with Horse Trade, punkrock/lovesong at The Brick, Dido and Aeneas, A River Pure for Healing, An Absolutely Perfect Life, Accidents Do Happen, and Tom’s Things. Regional directing credits include: Guided Tour for Hibernian Hall in Boston, Dido and Aeneas for the Boston Early Music Festival, A Midsummer Night’s Dream for Pigeon Creek Shakespeare in Michigan, El Shaddai at La Gran Familia in Monterrey Mexico, The Jungle Book for Yancy Elementary and The Tempest for Stuart Hall Middle School in Virginia. Assistant directing credits include Antony and Cleopatra, Love’s Labour’s Lost, and A Christmas Carol for the American Shakespeare Center. Currently she is directing Turning the Glass Around, written by Pia Wilson. 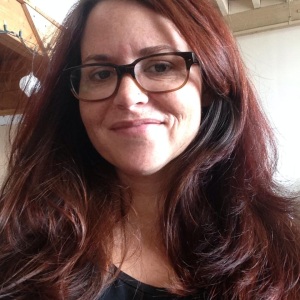 CP: Hello Heidi, and welcome to DirectorSpeak! Let’s jump right in with the early part of your career. Tell me about a specific moment that made you finally decide that directing was what you really wanted to do.

HG: I’m not sure that my decision to become a director happened in one moment, but more through a series of small moments, queries and inspirations over and over again. Every production process is so different, that at least once in every production I have a moment when I am completely overwhelmed. There are a lot of moving parts. Conversely, there is always a moment of amazement as well; it might be a random conversation that resulted in an amazing conversation or a found object that inspires a fundamental part of the storytelling. All of this is what keeps me interested and excited about directing.

CP:  Let’s talk about training. Did you get your training as a director through formal means, or was it more “on the job” training?

HG: I have an MFA in directing from Mary Baldwin College and the American Shakespeare Center in Staunton, VA. During grad school I spent extra time training at UVA and I directed outside projects at local schools capitalizing on my past teaching experience. However, daily interactions at work, with family, friends, or strangers on the street might inform any number of aspects of my directing.

CP:  Sometimes, the title of “Artistic Director” can be a bit ironic, as you add the word “Artistic” but it typically means you end up doing less art and more business. Did you find this true with your time as Artistic Director of Horse Trade Theater Group? In the end, did the lessons learned on the business side help inform you as a director?

HG: I loved my job as AD of Horse Trade. In particular, I loved working with the artists in our community. We really worked hard to give emerging artist’s space, a larger professional network, critical feedback, and producing support. I also loved the new play development that happened with The Drafts and our Playwrighting Workshops. So much good artistic work happened while I was there and so many new things started there. As an artist it has been important to learn how much my work costs to produce. Thinking of theater as ‘the business’ or as ‘the art’ might set up a false opposition. Understanding the costs helped me understand the big picture so I can make more informed decisions about what to produce. As far as the business/art balance of theater goes, it is important to realize that we all work in the business of theater and the business supports the art.

CP: Speaking of Horse Trade, what’s one of your favorite memories about what you accomplished while working there?

HG: One of my favorite memories is more of a producing experience than directing, but it applies to the idea of random conversations inspiring great new things. It all started with a random conversation at the UNDER St Marks bar (which is really a very small beer pantry), with Seth Lind, my future collaborator works at This American Life. I asked him if he ever wanted to create his own storytelling show. Soon after that we created TOLD. I was so proud of that show- the format and the amazing performers and content. We started out hosting a free show and grew the show into a money making show that sold out every performance and inspired a storytelling festival! It was wonderful to watch the show grow.

CP: Have you ever been an assistant director? If so, did you find it helpful to you in terms of learning and/or networking?

CP: Tell us about an incident while directing that taught you a big lesson, in either a positive or negative fashion.

HG: Recently I worked on a show in Boston where we positioned the stage in the middle of a large performance hall, with seating on two sides. It created certain staging obstacles. I wanted to audience to feel like they were the proverbial ‘fly on the wall’ as they watched each scene.  I was very happy to avoid ‘presentational’ staging, however my audience was challenged by the unconventional nature of the staging. I was working outside their expectations. While I think the production was a success on the whole, but while my staging was a strong choice, in reality it was only semi-successful. It might have worked better in a venue with better acoustics and a theater audience with less conventional expectations.

CP: How do design elements fit into your vision for a production? 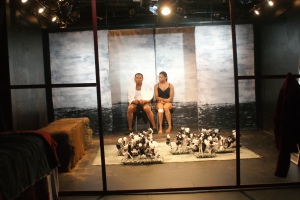 HG: Design elements can really take a production to another level. In theater we have such an amazing opportunity – we have the suspension of disbelief as an implicit contract with our audience. I think this allows us to do things that really are not possible with more realistic media. All of this is to say, I think of any design element as a storytelling opportunity.

CP: Do you prefer working with the same design team again and again, or do you prefer to mix it up?

HG: With design elements that influence the creation of the project- like the puppets in Turning the Glass Around or the opera singers in an upcoming project – I like to mix it up. With bread and butter elements like lighting and sound, I like to use my old trustworthy collaborators. But, people’s schedules make it tricky to get what you want every time. Sometimes this results in amazing new collaborations.

CP: Which leads us nicely to Turning the Glass Around, which is the inaugural production of Work/Space Collective. But before we talk about the play, can you tell us a little about W/S-C?

HG: I really like working on my own projects. Work/Space Collective is a way for me to do this with any number of collaborators. Having such a nimble company that is not attached to any particular space, allows me much greater versatility with future projects. I am really excited to see how this new company grows.

CP: Turning the Glass Around is written by Pia Wilson. You and Pia have worked together quite often, right? What is it about the two of you that allows you to collaborate so wonderfully? 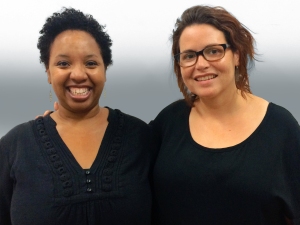 HG: I have been working with Pia Wilson for years. We met right before she became part of The Public’s Emerging Writer’s program; she was a part of the first group. Pia writes plays like Shakespeare- poetic, deeply human, and universal. I love directing Shakespeare, but my work in New York has been primarily with new plays. Pia really writes the perfect plays for my toolbox. We also share similar social politics, which we are passionate about, particularly when talking about race in America. And, we are just good friends.

CP: This play takes something that is common to people all over the globe -the loss of a parent- then filters it through the lens of first-generation “American Dream” ambition. What do you hope the audience will get out of this re-framing of a familiar story?

HG: I hope audiences do just what you are speaking of – relate. If that happens, the script will do the rest.

CP: Your cast is made up of some very skilled actors of diverse backgrounds, and I read that this is part of the mission of W/S-C. How impactful was it to have such a treasure trove of experience present in the rehearsal hall?

HG: We have been so blessed by our designers, actors, and puppeteers. They are amazing! Really a dream crew to work with.

CP: Heidi, thanks very much for sharing a few words with us. Best of luck with Turning the Glass Around and all the other projects you have coming up!